Jimmy Kimmel Live! (aka JKL) was originally broadcast live, but due to concerns about its sometimes controversial content, ABC began pre-taping his shows. Despite this, Kimmel still steers up controversy, most recently during an October 16, 2013 episode when during a taped segment of “Kids Table,” an elementary school-aged child suggested killing everyone in China as a way to solve the U.S. debt problem and Kimmel laughed it off as an interesting idea.

Unique about Jimmy Kimmel Live! is its friends & family-orientation — not so much in the content of the show, but of its cast. Jimmy Kimmel’s band is led by Cleto Escobedo III, a childhood friend, and Cleto’s dad, Cleto Escobedo, Jr. is a member of the band. “Uncle Frank” Potenza, Kimmel’s uncle, appeared regularly on JKL until his death; he was 77. “Uncle Frank” was married to Aunt Chippy (they divorced in the mid-90s, after 28 years of marriage), who also appears on JKL. In addition, Jimmy’s “Cousin Sal” helps with hidden camera pranks.

Both Jimmy Fallon and Jimmy Kimmel have vibrant social media communities (this is one reason why NBC chose Fallon to succeed Leno). Courtesy of The Wrap, here’s a graphic of their shows and individual social media cred: 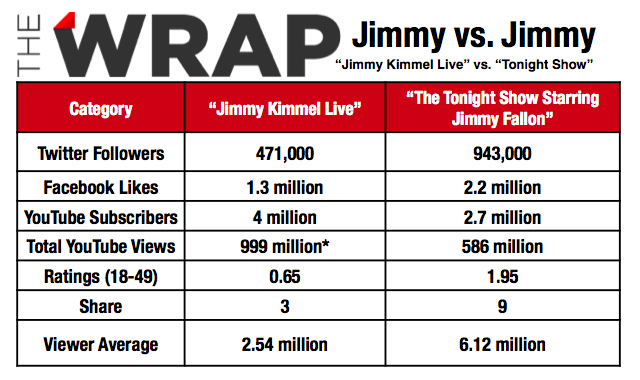